Years ago, my friend Joe Linehan ran a roleplaying game based on cereal mascots as the player characters. To ramp up the strangeness, he kept it grim and gritty by running them through the plot of Watchmen.

I loved the idea so much that I spun off a scenario based on Independence Day and Aliens. In my game Plan Q from Outer Space, Quisp invaded Earth with giant cereal bowl spaceships poised to shoot giant beams of milk to destroy major cities. On board the ships were alien Soggies, with lactic acid for blood.

Joe and I have run several games in the cereal-verse since then. My favorite title was Joe’s wartime epic A Box o’ Trix Now (“I love the smell of cereal in the morning.”).

Night of the Living Crunch

In the zombie horror game “Cereal Killers: Night of the Living Crunch,” the dead rise and want to eat your grains.

The Breakfast Club is…

We start with the groups in pairs on separate adventures. Cap’n Crunch and Toucan Sam start out on the Crunchberry Islands, being chased by Cocoa Krispie pygmies. Tony is coaching Sugar Bear out of his hibernation. Lucky has been asked to deliver the eulogy for Dig’em Frog. Chocula is sponsoring Sonny at his first chocoholics anonymous meeting. Quisp is trying to teach Trix the “basics” of nuclear physics.

Everyone gets back to headquarters, the Honeycomb Hideout, to compare notes, when the phone rings. It’s Fruit Brute, howling for help. “Cap’n, they’re all over me!” The crew heads to Bransylvania to investigate.

After exploring the moors, they find their werewolf friend dismembered, with stinky white goo at the “edges.” They find themselves surrounded by zombie soggies (around two per PC) that can turn others into zoggies by touch. Trix or Lucky can try to reverse the effect, or Tony could suppress the effect with effort in a pinch. Frankenberry probably has medical equipment that could help, as well.

A spell from Lucky or some super-smell from Sam could find a trail of weird residual energy leading up to Frankenberry’s castle.

To find out what’s really happening in the plot, select the text in the following box. (Triple-clicking inside the box will work for that.)

Frankenberry isn’t himself; Quisp’s brain is inside his head. When he had “cured” Quisp by cleaning his brain, he put the wrong brain in. FrankenQuisp has Booberry magically chained up in the basement to siphon off his ghostly energy to build a death ray. Booberry was leaking an “afterlife fog” that drained down to the moors and raised the zoggies. The team can rescue Booberry, freeing him to move on to the next world, and fight FrankenQuisp. Swapping Frank’s, Quisp’s, and the spare brain back into the right bodies is a relatively simple procedure for anyone with first aid training. The spare brain goes into a jar marked “Mattingly” who wasn’t using it, since he’s just a game designer and a preacher.

I was inspired by another friend’s game props. Karl Keesler ran a League of Extraordinary 1970’s Gentlemen game, with the character sheets designed as 8-track tapes. That inspired me to step up my character sheet presentation, and I found a way to print cereal box wrap-around designs. So I turned Joe’s original character sheets into boxes, and taped them onto actual mini-cereal boxes. These are written using the HERO System rules. 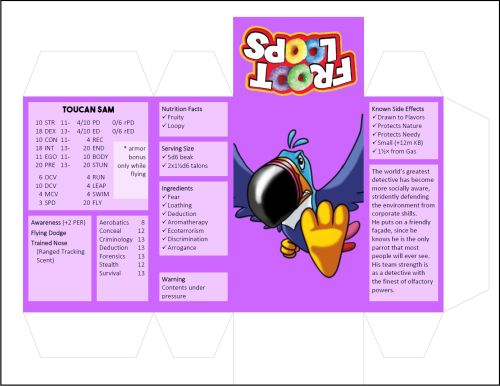 You can download the character boxes here and the printer-friendly black-and-white version here.