At Origins Game Fair (and at home beforehand), I ran a roleplaying game based on the Spider-Man: Into the Spider-Verse movie (and comics that inspired the movie).

I used the Marvel Super Heroes (1984) system for the game. The system is sometimes nicknamed the FASERIP system, since that’s what the initials of the abilities spell (Fighting Agility Strength Endurance Reason Intuition Psyche).

Since the movie included Peter A Parker, Peter B Parker, Miles Morales, Spider-Gwen, Spider-Man Noir, Penni Parker, and Peter Porker the Spectacular Spider-Ham, I chose to write-up some of the other Spideys that have been in comics over the years.

A standard FASERIP character sheet is a rather nondescript wall of text.

In the movie, characters each introduce themselves with a comic book cover, so I formatted the character sheets to look like a comic. 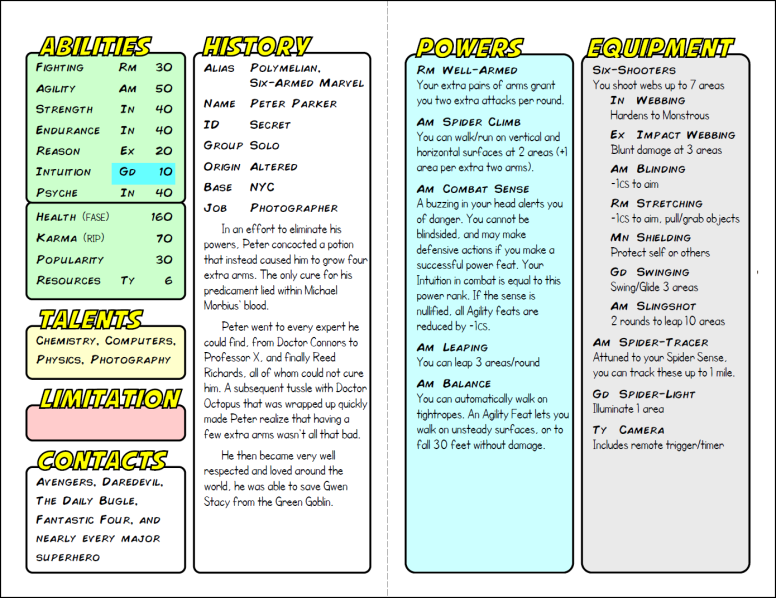 For characters with Combat Sense, I also highlighted the Intuition stat to remind the player that the power’s rank replaces the Intuition score during combat,

I vaguely followed the Spider-Geddon comics story-line that covered the attack from Morlun and his family of Inheritors. They’re an immortal family of interdimensional totem-eating vampires that like eating spider totems the best.

Depending which characters the players have chosen, they can get pulled into the adventure through Spider-Man 2099 watching Morlun kill a different Spider-Man 2099, a dire warning from Madame Web, a galactic alert to Agent Venom, an Avengers alert to Spider-Woman’s dimensional watch, or some other hook. From there, it’s a matter of Spideys gathering their forces before Morlun attacks.