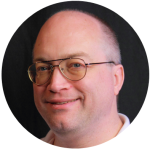 Dave Mattingly has a background in technology, writing, and speaking, who works with data for a living. He loves learning, and speaks at database conferences on topics such as geospace, governance, and analytics.

Spiritually, he works for the Lord to reach his fellow nerds and weirdos. He preaches at conventions dedicated to games, science fiction, and other geeky hobbies. He serves as vice president of the Christian Gamers Guild, and sector commander for Fans for Christ.