My podcast interview with Life of Emerald‘s Kate Lee as part of her Make Mental Health Normal Again series is online.

Thanks to the Christian Nerds Unite podcast for interviewing me about the Christian Gamers Guild and how we’ve been setting up church services at gaming conferences for the past 20 years.

Here’s the news featurette from a few years back when I preached an “Infinity War” sermon at Lexington Comic Con.

Here’s a peek at our most recent in-person church service at Gen Con.

Now that vaccinations are plentiful, it’s time to finally gather in person to say goodbye to Linda Mattingly.

The chapel seats 400 when it’s operating at full capacity, and the parking lot can hold 150 cars.

Achievement Unlocked: How to Get Promoted is a presentation I gave on career advice for SQL Saturday Minnesota (12/12/20). SQL Saturday is a worldwide recurring training (free unless you want to pay for their onsite lunch) primarily about databases, but also security, reporting, technology in general, and personal development. Look for one in a city near you at www.sqlsaturday.com.

My lovely wife Linda passed away this weekend from an apparent stroke.

We met in Florida in 87 at a theater where she was acting.
I introduced myself and kissed her hand, so of course she melodramatically swooned.
We dated a week later, engaged a month later, and married a year later onstage in that very theater.

Her big heart and ready smile inspired all she met, and even taught a shy nerd like me how to open up, laugh, and live.

…until the make-up came off.
(No, wait, this is her as the ghost in Fiddler on the Roof…)

She’d been in a wheelchair and near-constant pain for the past twenty years or so…
…But now she’s finally free, and once again dancing and cartwheeling.

She had to give up her sign language interpreting for the church years ago because of her tremors…
…But now she’s enthusiastically praising the Lord with her hands (and putting her whole body into it) once again.

Helping others was incredibly important to her.
Most of you know that she was highly involved in a volunteer homeless outreach every Wednesday night, faithfully providing meals, blankets, socks, and more.
She’d want to ensure her mission continues, so if you’d like to help, please consider donating to The Forgotten Louisville, either via PayPal to forgottenlouisvilleoutreach@gmail.com or via mail to The Forgotten Louisville, 911 Southview Rd, Louisville KY 40214, or even by volunteering yourself, or otherwise caring for those around you.
I know she’d appreciate it.

Last year we revisited that theater, which had the perfect show going. I’m rotten, and she’s really something.

Thanks, everyone, for all the support you’ve already shown us.
I love you all, and so did she.

From time to time, I go from place to place.

You can keep up with me on my tour page.

Usually, this is in person, but lately a lot of it has been online.

Today (Saturday), I’ll be speaking at the Layer 8 Conference about Impostor Syndrome. (Update: This has been recorded, the slides are here, and the video should be available in a couple of weeks.)

Monday 6/8/20, I’ll be speaking at the Open Security Conference about improv comedy and security. (Update: The slides and video are available.)

In two weeks, I’ll be preaching at the Origins Online game convention. (Update: The entire conference was canceled)

UPDATE: This has been canceled, and will be rescheduled.

I’ll post a followup once the new date is confirmed. 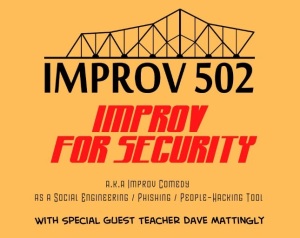 I’ll be teaching a workshop on how to use improv comedy techniques for security.

It’ll be Monday, March 16th from 7:00 – 9:00 pm. The workshop cost is $30 (payable online or at the door). I also accept haunted pirate doubloons and nonsequential unmarked bills in a paper bag.
Improv for Security
March 16 at 7:00pm
$30.00
OPEN Community Arts Center
2801 S Floyd St #100
Across the street from Cardinal Stadium
Park in the numbered lot (free) on the corner of Boxley and Floyd! 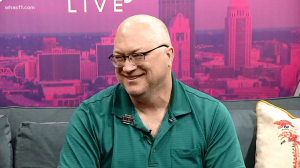 Have you ever gotten an “urgent call about you car warranty” or a demand that “you need to pay the IRS by credit card right now”? Social Engineering is the practice of talking your way into or out of situations, and is often employed by the underhanded, but can also be used to defend against those very attacks.

The rules of improv comedy can apply to many social interactions, including bluffing your way to compromise a target. The constantly changing situations of improv are great practice for accepting unexpected circumstances, and happily going with the flow.
Dave Mattingly was a NASA rocket scientist while also a comedy and punk radio DJ. He led a sci-fi and RPG publishing company, while writing anti-terrorism software for DHS. He’s an itinerant preacher, entrepreneur, award-winning speaker, and occasional improv comic. In short, he doesn’t know what he wants to do when he grows up.

I once again participated in the 48-Hour Film Project. (My first time was A Fool’s Errand three years ago.)

On Friday night, each team draws a genre out of a hat (actually, each drawing has two genres, and the team picks the one they’d like to do). The final film must be 4 to 7 minutes long (credits at the end of the movie don’t count against the maximum time, unless the film would have been too short without them).

On top of randomly drawing a genre, each team has three required ingredients: a line, a prop, and a character. Even though each team gets its own genre, all teams share those same three ingredients. Our (and every team’s) ingredients were:

This year, I was part of Company Outcast, a local theater/comedy company.

Our team included people that I’ve been friends with, like Rachel Allen (who I introduced to the 48HFP), Marcy Ziegler (leader of Company OutCast), Christie Troxell (who I’d met at my first 48HFP), Martin French (who I knew from the Alley Theater), and Victoria Wagner (who I’d met during OutCast‘s “Best Bits” show). Plus a bunch of new really cool people.

We drew Horror or Mockumentary. A mockumentary probably would have been a lot of fun, but we chose horror.

I’ve Got You Covered

Since our character Tilden was an author, and I had run a publishing company for several years, my job for the film was to put together some prop books for him to have at his signing.

All I had to go on was that it was a mystery book, with the title “Double Vision.” And I only had about four hours to design and print the cover, and assemble onto actual books.

By that point, I’d already designed at least a hundred book covers, but I’d never mocked up made a fake cover before – they’ve all been real book covers that were printed at a press to encase actual books. The finished product turned out fairly well.

I also ended up helping to block the daylight during a bar scene, by standing in front of the curtain. Since taking up space is one of my many talents, I spent an hour or so denying the sun while the crew filmed several scenes with multiple takes. During one of the shots I ended up in frame, just standing by the door crossing my arms, the company decided to credit me as a “Bouncer.” (Possibly since I already look somewhat horrifying.)

So now I have actual real-world experience as a pretend real bouncer. You’d better watch your step, buddy.

Here’s the film we completed.

(The description says Do Not Share, but now that the screenings, voting, and awards have happened, it’s all good.)

Gen Con lists us as a Featured Event.

I was away at another conference during most of Gen Con, and only drove up for the Sunday church service.

This year, Tom Vasel (of The Dice Tower) once again preached for us. Bubba Stallcup (of Love Thy Nerd) led our music.

I first started holding Christian Gamers Guild church services at Gen Con back in 2002 (or maybe 2001). Several years ago, we got too big for the Convention Center (the biggest room they could give us there had a capacity of 200), so they moved us to a nearby hotel. Our current space is great, but it’s mildly inconvenient for Exhibit Hall vendors who need to get there by 10:00, since it’s a good 10-minute walk.

Click for a video clip of our worship service.

These days our services generally get around 250 people, which is our largest church service of the year. At smaller conventions, we might get 50 to 100.

You can see four video clips of the service here:

Here’s our program for the event.