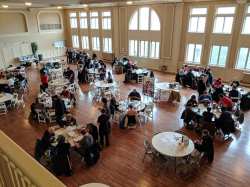 Nerd Louisville hosts an annual game-playing convention called Nerdlouvia. I’ve attended all of them, and I volunteered to help organize the event this year (12/7 to 12/9/18).

This was our first three-day event.

Saturday and Sunday were filled with games, games, and games.

I also preached a game-themed sermon on Sunday morning, for the Christians who were attending the event.

Tabitha Johnson of the Nerdesque Burlesque danced as Leeloo (The Fifth Element) and Leela (Futurama); photo by Larry Green

The categories (and winners) are:

In the Cereal Killers world, Cap’n Crunch, Tony the Tiger. and others face grim and gritty threats

I ran two of my most popular games, Meep on the Borderland and Night of the Living Crunch.

In Meep on the Borderland, the Muppets embark on a fantasy adventure. Kermit stars as Hopalong Kid, leader of the Muppy Men. The rest of the usual (and semi-usual) Muppet crew are there, too.

The Cereal Killers world was created by my friend Joe Linehan. In his original adventure, he sent Cap’n Crunch, Tony the Tiger, and the others through the plot of Watchmen, to give you idea of the level of absurdity and insanity involved. I loved the idea, and between us we’ve put the poor cereal characters through the plot of Aliens, Apocalypse Now (“A Box of Trix Now”), and more.

I played a session of The Expanse RPG, based on the book and television series. It was pretty faithful to what I’ve read and watched, and the elegant system mechanics were a good fit. 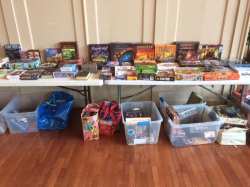 Nerdlouvia also had an auction, a game swap table, video games, anime films, side quests, vendors like Goodman Games (Dungeon Crawl Classics), Card N All Gaming, and Red Bull (who actually offered free cans of Red Bull throughout the event). But most of all, Nerdlouvia was filled with friends, new and old.

And best of all, as a licensed non-profit, all the proceeds are donated to a local charity.

I hope to be involved next year, too.