At ConGlomeration 2016, I preached about dungeons and dragons (the ones in the Bible, not the roleplaying game itself).

There are several references to dungeons in the Bible. Here is one of the most famous:

Joseph’s master took him and put him in prison, the place where the king’s prisoners were confined. (Genesis 39:20)

Joseph (of “technicolor dreamcoat” fame) was sold into slavery by his own family, then wrongly accused by his owner’s wife. Despite his obvious integrity and quick rise through the ranks, he was thrown into prison (which might have been a dungeon, or a holding facility until he did go into the dungeon).

After a few years there, he tells another prisoner: 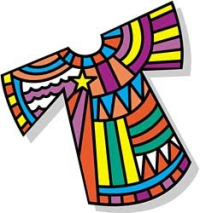 “I was forcibly carried off from the land of the Hebrews, and even here I have done nothing to deserve being put in a dungeon.” (Genesis 40:12)

After once again showing his impeccable character, one of the prisoners that he helped get back to his old job remembered him when the Pharaoh had a troubling dream.

Pharaoh sent for Joseph, and he was quickly brought from the dungeon. When he had shaved and changed his clothes, he came before Pharaoh.
Pharaoh said to Joseph, “I had a dream, and no one can interpret it. But I have heard it said of you that when you hear a dream you can interpret it.”
“I cannot do it,” Joseph replied to Pharaoh, “but God will give Pharaoh the answer he desires.” (Genesis 41:14-16) 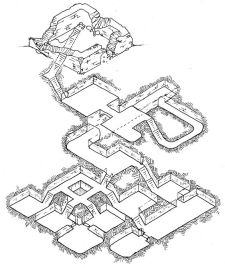 Joseph finally got his first taste of freedom after years in the dungeon, and gives God the credit for his talent. What a guy.

After Joseph was promoted to the number two man in the empire, and reuniting with his family, they settled there in Egypt and grew in numbers.

Centuries later, the Israelites had been enslaved as a people until God had Moses lead them out. The last step in that process was this tenth plague:

What these passages say to me is that, like Joseph, there is no dungeon so deep, no situation so dire, where God cannot save us. Conversely, like the plagued firstborn, there is no throne so lofty and protected nor dungeon so remote and forgotten that God cannot discipline us.

Many of us face metaphorical dragons in our lives. Addiction. Poverty. Depression. Abandonment. Sometimes we slay these dragons, and sometimes the dragon wins.

Besides the dragons in our heads and hearts, there have been literal and figurative dragons mentioned in the Bible.

The most famous dragon in the Bible is the red dragon in Revelation (aka the Apocalypse).

Then another sign appeared in heaven: an enormous red dragon with seven heads and ten horns and seven crowns on its heads. Its tail swept a third of the stars out of the sky and flung them to the earth. The dragon stood in front of the woman who was about to give birth, so that it might devour her child the moment he was born. (Revelation 12:3-4)
And I saw an angel coming down out of heaven, having the key to the Abyss and holding in his hand a great chain. He seized the dragon, that ancient serpent, who is the devil, or Satan, and bound him for a thousand years. He threw him into the Abyss, and locked and sealed it over him, to keep him from deceiving the nations anymore until the thousand years were ended. After that, he must be set free for a short time. (Revelation 20:1-3)

The dragon is mentioned much more than this in that book, so investigate further if you’re interested.

Revelation is a bit of a strange book. It is true on many levels at once. It is literal, figurative, general, specific, past, present, and/or future — all at once. As a famous doctor once sagely explained, it’s “timey wimey.”

There is a lot that can be learned from the passages above, like Satan’s fall from heaven, the third of angels that fell with him, Satan’s revenge plot against man and God, his coming punishment and following rampage, but let’s just keep it simple, and only look at Satan’s defeat.

The Apostle John wasn’t the only one that wrote about Satan’s defeat. Isaiah also spoke of the Lord slaying a dragon (plus, I’ve always thought “terrible, swift sword” was a cool phrase):

In that day the Lord will take his terrible, swift sword and punish the coiling, writhing serpent. He will kill the dragon of the sea. (Isaiah 27:1)

This tells me that there is no dragon so big that God cannot defeat it. Even more than that, God has already defeated (and at the same time is defeating and will defeat) the biggest dragon of them all (more timey wimey going on here).

This sermon did not have slides, but here is a flyer and the bulletin.