Peter Parker from Ditko (left) and after Ditko (right)

Ditko was a legendary comic book artist, helped define the genre. Along with Stan Lee, he created Spider-Man, Doctor Strange, the Green Goblin, Doctor Octopus, J. Jonah Jameson, MJ Watson, and many other early Marvel characters. He drew his characters… oddly. Spider-Man and Strange were awkward and gangling, not buff and heroic like most other superhero artists were drawing their characters at the time.

Ditko created other memorable characters, including some of these favorites of mine:

What if a superhero was crazy? Or at least acted crazy? And maybe also really was?

The Creeper’s complicated history began when he was introduced in April 1968, but here’s my quick take. Controversial reporter Jack Ryder dressed up in a costume from scraps to infiltrate a mob masquerade party. He was killed there, then “healed” by Dr. Yatz. The process made him strong and fast, and gave him the first regenerative healing factor in comics. But it also bonded the costume to his skin when he was in Creeper mode, making him actually yellow-skinned green-haired weirdo with a red boa/fur/cape and green speedos. He’s kind of the Joker as a bouncy superhero.

He’s been a superhero (even a Justice League member), a supervillain, and everywhere in between. He super-healed before Wolverine; he sassed and annoyed crime before Deadpool; he bounced around before the Beast; he wore a fur boa before Hulk Hogan.

Of course, being weird is his true superpower, according to most who know him.

He’s been rebooted as a woman, a demon, a cyborg, a robot, and amalgamated into Nightcreeper.

There was a wonderful episode of The New Batman Adventures dedicated to the Creeper.

I like the Creeper so much that I play him in a Champions RPG campaign set in Gotham.

Each time we play, I’ve been putting the Creeper into famous works of art. It’s fun! 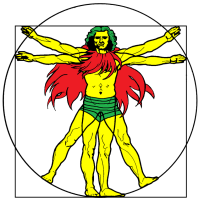 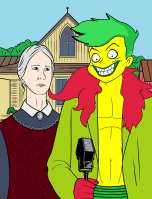 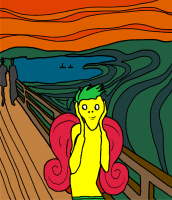 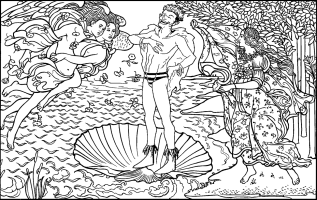 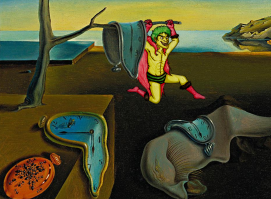 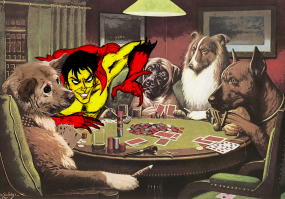 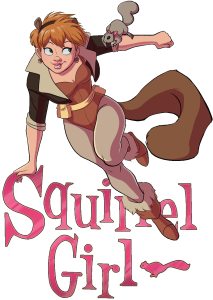 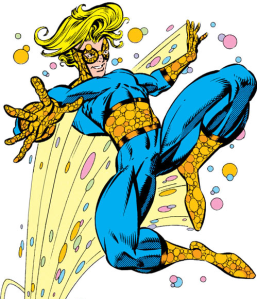 Speedball: Nerdy teenager Robbie Baldwin (and his cat) is bombarded with strange science rays and turns into Speedball: the Masked Marvel. He bounces, and has a field of colorful kinetic dots and a hairdo that defies gravity and taste.

I knew of Speedball, and glanced through an issue or two of his solo material, but it was in the New Warriors series that he really came to life for me, acting as comedy sidekick and nigh-indestructible distraction. Over the intervening years, he unwittingly helps launch Marvel’s first Civil War, and embeds himself in an iron maiden as punishment.

Squirrel Girl: I didn’t get that much into Squirrel Girl until the recent Unbeatable Squirrel Girl comic runs. Ditko gave her the powers of a squirrel, but the newer runs have amped up her compassion, empathy, and creativity. Building relationships becomes her real superpower.

The Question: My favorite rendition of the Question is the way Jeffrey Combs portrayed him on the Justice League Unlimited cartoon. He’s a conspiracy theorist with a mask that makes his face disappear. Famously, he was the basis for the Watchmen’s Rorschach.

More: Ditko also created Hawk & Dove, Mr. A, Odd Man, the Mocker, and dozens of others, enumerated on this wiki page.