A hackathon is an event for making. Sometimes it’s making something physical, sometimes digital, sometimes service-based.

(No, it doesn’t mean we’re breaking into people’s computers.)

The hackathons that I’m a part of tend toward digital. It might be converting something to a new format, transferring it to a new platform, combining things, securing something, analyzing something, open up access to something, or anything else along those lines.

In the past, I worked with Louisville’s Civic Data Alliance volunteer code brigade on projects like this:

March 4 2017 was “International Open Data Day.” Hundreds of cities around the world held hackathons and other events to celebrate, to educate, and to serve.

Open Data is a philosophy that information should be available at no cost. Government data, being underwritten through taxes, belongs to the American people (at least in theory). Downloadable/accessible datasets for crimes, parks, restaurant health inspection scores, and similar information can be used to help everyone.

The Louisville government is at the forefront of open data. The data.louisvilleky.gov website has hundreds of datasets free for public use in a variety of formats (shapefile, json, csv, and more).

In Louisville, we chose “public safety” as our hackathon theme. Volunteer hackers could work on whatever project they’d like, of course, but event captains (Becky Steele and Margeaux Spring) arranged for representatives from the police department and other areas of government to share their needs and offer advice.

The hackathon was held at LouieLab, a dedicated space for government and the people to work together on projects.

Forty to fifty volunteers worked on projects all day (detailed blog about the projects here).

Our volunteers from 2017; look at last year’s team here.

I worked on two projects, and also floated around a bit helping teams as needed.

I wrote my first Alexa Skill! The Amazon Echo / Amazon Dot has a speech interface, so people can access the internet by voice alone.

The event was covered here: 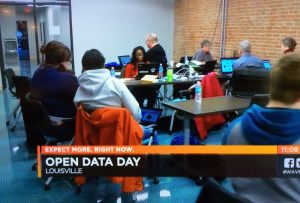 and blogged about here:

The Civic Data Alliance will host another hackathon for the National Day of Civic Hacking, and will ramp up to monthly public meetings and hackathons once per quarter.

Join the meetup group and the slack team.