There were some great seminars and breakout sessions, and 500 or so leaders from all around the country.

On Wednesday, I attended the LouieStat Live workshop.

This wasn’t just a theoretical discussion of what the process is and how it works — this was a full actual meeting, so that the audience could see the entire process, and how everyone was involved. In this case, it was the first official LouieStat meeting for EMS. There were several officials present, representing technology, communication, administration, and such, plus the new director of EMS (Jody Meiman) and some EMS managers (Chad Scott and Diane Vogel).

Some of the EMS concerns that I learned were that the average ambulance check-in time has increased by about 5 minutes, but that it’s largely due to new policies and processes on the hospital side making dropoffs take more time. They’re addressing that by providing the hospitals with more radio call-ahead information to help them prepare. (Busy ERs might have to doubleup with two patients in a triage room, and knowing the gender and general complaint of the incoming patient helps them organize.) Also, there are way more low acuity (non-emergency) ambulance runs than I would have guessed. 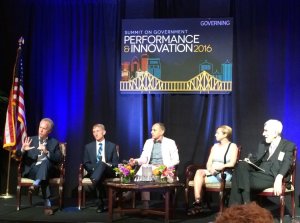 I chose this session because of my love for data transparency. I’ve been familiar with LouieStat for a while, and know some of the people that created it. I even made Louisville’s mayor Greg Fischer chuckle when I answered his question about why it’s important to take incremental steps before all the information is gathered, when I answered that “You can’t steer a parked car.”

There were great ideas offered by the panel of leaders, and examples from the community, but my favorite one came from William Evans, the Boston Police Commissioner. To pave the way for improved race relations in the future, the police bought an ice cream truck that they drive around parts of town where they are frequently hated and feared. By giving out ice cream, they hope to forge bonds with the younger generation, and keep them away from violence.

While the commissioner was saying this, Greg Fischer was smiling and staring off in the distance… I wonder how long until Louisville gets a city ice cream truck? 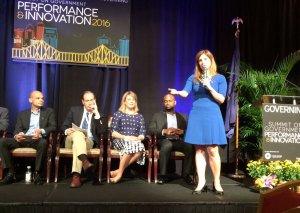 My only complaint is that (as expected) they were all too short. I would have preferred breakout sessions instead, so that we could split up and dive a little deeper into one topic of interest.

The talks themselves were great, and covered a broad swath of societal issues. Early in the planning stages, there was a chance that I would have been speaking on behalf of community involvement, stemming from my volunteerism at the Civic Data Alliance, hackathons, and other local events. It was good to see Daro Mott again (speaking about data-driven government), who once came from Cleveland a year or two ago to speak at a TALK (Technology Association of Louisville KY) event, and who I’ve seen once or twice when I’ve spoken at Cleveland SQL Saturdays. 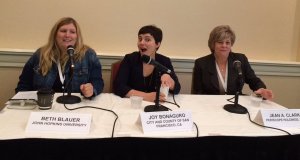 I was so overwhelmed (in a good way) by the speakers on this panel that I could barely take a note. Beth Blauer is the Director of GovEx (the Government Center for Excellence) at John Hopkins. Joy Bonaguro is the Chief Data Officer for the City of San Francisco. Jean Clark is the President of Periscope Holdings.

The panel was so dynamic and uplifting, that I wished it could have gone all day.

Steve Case, the founder of AOL back in the day, came to Louisville as part of his twenty-city tour. His new book, The Third Wave, applied the concepts (farming, industry, post-industry) of Alvin Toffler’s original Third Wave book to the internet. First came the planting of ISPs, then the connected backbones of industry (Google, Amazon, etc.), and now the third wave — nigh-invisible integration and proliferation in real-world devices.

I sat at a table close to the stage, and Steve sat with us for a little while before going up to speak.

On Wednesday evening, TALK hosted a cybersecurity event, focused on the internet of things. Greg Garcia (the White House’s first cybersecurity chief) spoke about the wonders and the dangers that await us.

On Thursday at lunch, at the Summit itself, my great friend Becky Steele was crowned the Continuous Improvement Champion for her work at Code Louisville. I believe she’ll defend her title in the gladiatorial arena at next year’s conference. Or not.

On Thursday night, EnterpriseCorp (the entrepreneurial arm of the city’s chamber of commerce, Greater Louisville Inc) held its annual Evening of Entrepreneurship. Steve Case was the keynote speaker here, too.