I’ve done a lot of things for a living over the years, and after working with a number of short-lived startups, I figured it was time for a “real job.” I started with Capital Holding which rebranded as Providian while I was there. 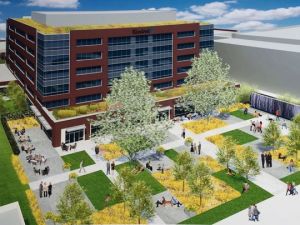 After working for several startups (six jobs in two years thanks to money running out, projects falling apart, bosses going to prison… the usual), I decided to give corporate America a try.

I went to work at Providian (which was Capital Holding when I interviewed). I interviewed at one of their main buildings, but when I showed up for work two weeks later, the building was boarded up. They’d opened their new offices in a brand new building across the street, and forgot to mention it to me. 😉

My building was known as Agency Group (since we wrote software to support insurance agents). I was officially a Corporate Agent.

There were lots of cool things about the job, like a gorgeous building with an ornate atrium, three different bosses who were peers of each other (one focused on the road ahead, one focused on the task at hand, and one focused on the people’s well-being). It was a good arrangement, and I wished that it had caught on in more of corporate America at the time.

I made a lot of good friends, including one that I would go into business with years later.

I wasn’t quite ready for corporate culture. Actually, it’s more that corporate culture wasn’t ready for me. I was young, smart, and bold. Moving through six jobs in two years, each better than the last, left little room for fear of failure or fear of reprisal. I knew that if anything were to happen to me, I’d find a better job within a couple of weeks.

But there’s one really cool thing in particular that I’d like to focus on.

The CEO, Irv Bailey, worked in a different building a few blocks away. One day, he called an all-company meeting, so several hundreds of us crammed into the biggest room we had to listen to what was up. He spoke a lot about corporate vision, opportunities, challenges, other divisions, and many of the things that top-level execs share with their employees. But most of the company’s big picture was new to me. My brain started connecting the dots from idea to idea, and I got more excited as I listened, knowing the kind of things that I could do to help us along that a lot of long-timers didn’t realize.

I sent the CEO’s secretary an email with some thoughts. I was surprised to hear that Irv wanted to meet with me personally to discuss them. Wow.

I actually dressed up, with a tie and everything. I met him in his tower office and we talked for a long time. Some of my ideas, the company was already doing, and I didn’t realize it. Some, the company had tried and failed. Some were… not actually legal (oops). But there were a few left that he really liked.

After that, he set up a quarterly meeting with me to see what things I was cooking up over in my department, even though there were probably eight managers in the hierarchy between the two of us. We’d also talk about the corporate culture, the wonders of technology, and anything else. He also expressed an interest in how my department was run, and we’d also discuss that. I kind of felt like an undercover operative, a different kind of Corporate Agent. Cool.

Using my background in startups, graphics, gaming, outer space, broadcasting, and other skills and talents from my experience toolbox, I came up with some pretty cool stuff. Cool for the time, anyway. The sales department called one of my projects “the most exciting thing they’d ever seen come out of IT.”

Word got out that I was going outside the chain of command, by meeting privately with the CEO. My new boss didn’t like that at all. (Having the three bosses was a little to progressive for most people there, and they restructured us back into “normal” org chart reporting.) She actually forbid me from going to my upcoming meeting. When I called Irv’s secretary to cancel, she was confused and asked, “Who’s this person that says you can’t come over?” Irv and his secretary had never heard of my boss before. Her reputation did not reach as far as mine, we found out.

After a lot of arguments to settle that situation, it seemed that my boss kept trying to sabotage my efforts. She’d cancel or delay software projects of mine that were ready to move to testing, that I’d already run past focus groups that I formed myself. She told me that people didn’t want that, they wanted some other thing that was crappy.

Then the bad bad news happened. We found out that all my projects my boss had mothballed were being shown to people outside the company — by my boss. My prototypes were being touted as “ready to roll into production” and “the future of the company” to outside buyers that eventually did buy Providian and laid off much of the workforce. I left before that happened, though. I felt like I was working for a traitor.

When I turned in my notice, it wasn’t long before someone had told Irv about my boss essentially driving me out of the company and misrepresenting / stealing my work (which was the company’s intellectual property, even). Things didn’t turn out well for her.

For my next job, I wanted a clean break. Something else to do. So I left town, and took a job a couple hundred miles north, in Fort Wayne, Indiana.

Go back to Part 3: Floor Show or onto Part 5: Wire Transfer