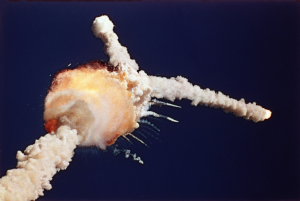 I’ve done a lot of things for a living over the years, and one of my first was also one of the coolest.

Later that year, I got a call from NASA with a job offer, which I accepted. Over the phone. They didn’t realize I had an orange mohawk. I was still a teenager, after all. Ya gotta live.

A few months after that, I moved down to Florida to work at Kennedy Space Center, where I worked in the Mission Planning Office and helped write the software that scheduled shuttle launches, landings, and maintenance.

I got a haircut before starting, and looked like a real person. But before long, I was back to my old cranial tricks.

My office is visible in all of the footage used in the movies. That one giant building that’s always shown is the VAB – the Vehicle Assembly Building. It’s the mechanic’s garage where the shuttle goes for its oil changes and other maintenance.

My job was actually in NASA’s “Trailer Park.” There were some old railroad cars pushed together sideways with the open sliding doors lined up, making a large single office with branching rooms, sort of. It was a cheap way to use old equipment to make something new-ish. It was air-conditioned, carpeted, and otherwise very nice inside, but I found it amusing that it was practically made of garbage.

When we went back into space the following year, I got to stand on my office rooftop to watch the launch. The vibrations shook my whole body. It was amazing.

I didn’t like Florida, so once we got back into space, I considered my work done, and I moved a thousand miles north so I could do some other nifty tech stuff instead. More on that in my next cool job installment. 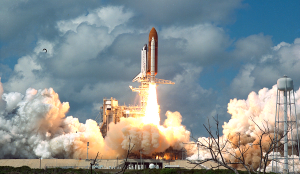 But writing space shuttle software for NASA as a teenager is certainly a powerful feather in anyone’s geek cred hat.