The REC Foundation (Robotics Education and Competition Foundation) hosts the VEX Robotics Competition each year. This is a competition for middle schoolers, high schoolers, and collegians. The worldwide championship came to Louisville in 2015, and will stay here for at least four more years. That’s a whole lotta flights, hotels, restaurants, and shuttling — about $5 Million worth.

At this year’s event, I volunteered for all four days of the event (Wednesday through Saturday). I was at the registration table for the first two days, which was an amazing experience. With over 800 teams from around the world, there were volunteers at the desk who could speak Portuguese, Mandarin, and a host of other languages. Each team had several students, plus their coaches, meaning that there were roughly 10,000 participants all told. For the next two days, I manned (i.e. “commandeered”) the booth for FirstBuild. They were one of the event sponsors, but didn’t realize that they’d also be getting a booth out of the deal. Since the booth would have been empty otherwise (which would disappoint me), and since I had a FirstBuild t-shirt, I sat at the booth and told people what FirstBuild is, how it came to be, what they do, and how jealous they should be because they haven’t been there yet.

The event is huge. It takes over the entire Fairgrounds and Expo Center — all four wings, and both stadiums.

You can volunteer here. (You don’t have to commit for the entire event like I did.) You don’t need to know anything about robots — they need all sorts of volunteers: registration, coordination, setup, scoring, etc. Kids can also help out, so this is a great family activity.

This week, the REC met with the Convention and Visitors Bureau, and dozens of leaders from business, technology, government, and education. (And somehow, also me.) They let us know some pretty cool things:
• the State Championship might be happening at U of L
• NASA has given them a grant to get at least one robot into every school in the county
• they’ll be offering “combo” exhibitor space in a Louisville Showcase for local business and tech, to make the sponsorship rates more affordable
• the event will once again coincide with the Thunder Over Louisville celebration
• they’ll once again rent out the entire Kentucky Kingdom amusement park for the kids Saturday night
• there are many scholarships for entry, including one from U of L

Here are some other cool robotic groups around town, if you’d like to find out more or get involved:
• The U of L Robotics Team
• The U of L Engineering Outreach
• Advanced Solutions
• DUG, the Drone Users Group
• The First Robotics competition 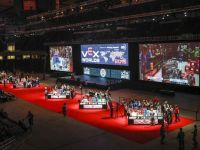 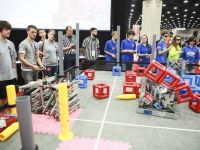