On June 28, I was a judge at the SkillsUSA national computer programming championship.

The SkillsUSA has been around since 1965, and the national championships have been held in Louisville since 2015. The event spans three days at the 1.3 million square foot (roughly 20 football fields) Kentucky Fair and Expo Center (“the Fairgrounds”).

In 2017, there were 6,200 students competing in over 100 different competitions. Everything from public speaking to diesel engine repair to cooking to first aid to t-shirt design to game programming. It’s a lot of fun (and a lot of walking) to go check out a wide variety of contests.

Several dozen programming students from around the country qualified as their state champions, and came to face off against each other in a times competition.

As judges we based our decisions on several factors:

Programming: As the contest began, everyone got a printout of two assignments. I can’t give specifics, but they were relatively straightforward tasks.

Requirements: Not everything was explicitly spelled out, but could be assumed, or the contestants could (and should) ask us for clarifications. 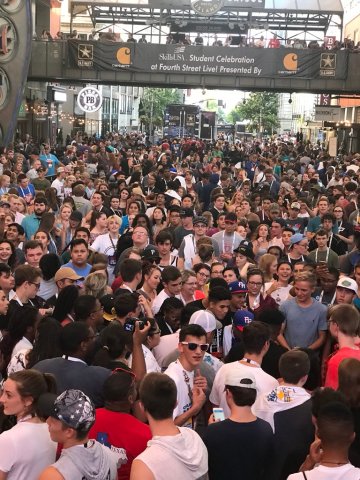 Readability: We also browsed through the software that they wrote, to see how readable it was (for whoever it is that eventually would take over your software, if this was for a job).

Interview: Each contestant was also “interviewed.” We asked the kind of questions that job applicants might get asked during an interview.

In 2017, I judged the public speaking competition, which was also a lot of fun to do. There were many incredible speakers.

With so many events going on, the event always needs volunteers to judge, check in, chaperone, and otherwise take care of the contests, students, equipment, and other aspects.

If you’d like to help out as well, reach out to the SkillsUSA team.