In April, I volunteered once more with Startup Weekend Louisville. This was our tenth event, and we kept the same leadership team the whole time, which apparently makes us unique among the worldwide startup weekends. According to the global Startup Weekend organization, most teams only lead a few then peter out or hand it off.

The event was held at both LouieLab and the Kentucky Science Center, which is next right door. The Science Center, and its giant IMAX screen was an amazing four-story backdrop for the keynote, pitches, and final presentations. And LouieLab, with its separate rooms and easily reconfigurable rolling tables, was wonderful for hosting the eleven teams that we had. 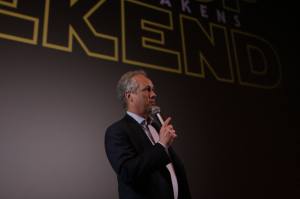 Friday night was the kickoff. We had around sixty attendees, and half of them pitched an idea. From there, the attendees voted on their favorites, and formed themselves into teams.

Our keynote speaker was Mayor Greg Fischer! Before entering into public service, he was an entrepreneur himself (in fact, my brother used to work for him years ago). He gave high praise to the startup community, and to our Startup Weekend crew in particular, thanks to us spurring on a new crop of go-getters twice a year.

The teams claimed their spaces at LouieLab, and worked like mad from Friday night to Sunday afternoon. A lot of the work involved talking to potential customers in person — getting their feedback, and adjusting the team idea based on that feedback.

The winning team was LifeBit, a wearable emergency alarm for the deaf and hard of hearing. It listens for alarms in the smoke alarm frequency range, and buzzes a smart phone. (Most deaf people have attuned themselves to waking up when their phone buzzes, and many even go to sleep holding it.) I like that solution because it doesn’t have to get fancy about tying electronically with a fire alarm, and isn’t limited to a specific brand or model. It could even be extended to buzz at other loud noises (tornado sirens, train horns, and such).

The LifeBit team was automatically entered into the annual Venture Sharks competition, with $37,000 on the table for the winning team. Most of the competition had already been operating for a year or more. LifeBit only had only existed less than two weeks when they entered. They didn’t win the big prize, but they did win the audience choice award.

We had ten organizers, eight mentors, and four judges. This is the first time that our leader was Paul Blakeley, who was a teammate of mine at my very first Startup Weekend several years ago.

Everyone (I believe) had a good time and learned some things.

We’ll be doing it again in the fall (most likely early/mid October).