This sermon talks about some of the scariest and goriest scenes in the Bible, and was prepared for my church service at the 2016 Fright Night Film Festival. It had been a while since I’d preached at a horror convention, and it was great to be invited to speak at this one.

Sometimes, people ask me what I think is the scariest/goriest movie, and I generally answer, “The Passion of the Christ.” The graphic violence is very disturbing, but the same could be said of many other movies. What makes this one so horrible is that (Christians believe) it’s real, and was necessary because of our own sin.

In this sermon, I didn’t cover the crucifixion, which is brutal by almost anyone’s standards. I left that one out due to its familiarity. Most churchgoers and horror fans already know it, so I focused my attention on some lesser-known bits of horror.

Your Days are Numbered

King Nebuchadnezzar subjugated the Israelites, and forced them all to worship a large statue of himself or be put to death (or life in prison). One of them was Daniel, one of God’s prophets. Daniel was in prison until the king’s son, Belshazzar, took the throne.

King Belshazzar drank from a gold goblet stolen from God’s temple in Jerusalem. Then fingers of a human hand appeared and wrote on the wall: mene, mene, tekel, parsin (Daniel 5:3,5,25)

A disembodied hand wrote on the king’s wall!

The king’s advisors could not interpret the writing (which was written in Aramaic), so they sent for the prisoner Daniel. Over his many years in prison, he had gained a reputation for being a godly man who could understand visions.

Daniel explained that the writing said, “numbered, numbered, weighed, divided.” This was God’s warning that:

The Israelites were being attacked by the Canaanites, whose army was led by Sisera. When the Israelite army had the upper hand, the commander fled to take shelter in the tent of a Kenite ally.

Jael, Heber’s wife, picked up a tent peg and a hammer and went quietly to Sisera while he lay fast asleep. She drove the peg through his temple into the ground, and he died. (Judges 4:21)

What a way to go. Very Saw or Final Destination. 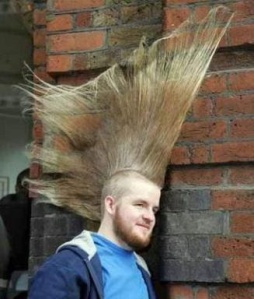 King David was a man after God’s own heart (1 Samuel 13:14). His son, Absalom, planned to kill his father and take the throne violently. Until the day he was outnumbered and ran away.

Absalom’s hair got caught in the tree, leaving him hanging midair. Joab plunged three javelins into Absalom’s heart while Absalom was still alive. On top of that, ten of Joab’s men ran him through with swords. (2 Samuel 18:9,14,15)

Absalom had long flowing studly hair that he was very proud of. But after riding so fast to get away, his hair bobbing up and down got snagged, and suspended him from the tree like a piñata. The army commander decided that he’d look better as a pincushion instead, and his men agreed.

Evil king Eglon was soooo fat (“how fat was he?”) that when Ehud the Left-Handed stabbed him with a sword about 18 inches long (45 cm), Eglon’s fat closed up over the hilt (probably another 6 inches), and it got left there.

Ehud delivered tribute to the very fat King Eglon, and said, “I have a message from God for you.” Ehud plunged his sword into the king’s belly. Even the handle sank in, and his bowels discharged. (Judges 3:24,25)

Ehud stabbed the ████ out of Eglon.

Because of Eglon’s obesity, when his bowels emptied, his servants on the other side of the door assumed their master was relieving himself. He probably had a reputation for some real stinkers. This extra delay gave Ehud the time he needed to escape.

Jehoram, son of Jehoshaphat (dontcha love that name?) was the king of Judah, the southern kingdom of Israel, and formed an alliance with the northern kingdom by marrying Athaliah, daughter of king Ahab (no whales were harmed in the making of this story). 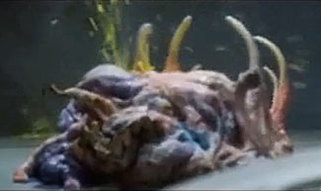 Despite his alliance, he rebelled against God (2 Chronicles 21:10). The prophet Elijah sent him a warning letter, which Jehoram ignored. As a result, God inflicted him with a slow painful death.

God afflicted Jehoram with an incurable disease of the bowels. After two years, it caused his bowels to come outside, and he died in agony. His people did not build a great funeral pyre to honor him like his ancestors. (2 Chronicles 21:18,19)

His insides became his outsides. His entrails became his extrails (another great quote from A Knight’s Tale).

My guess is that his intestines swelled to the point that they pressed up against his skin, and eventually pushed through. Doesn’t sound pleasant.

Not all of the gory stuff happened in the Old Testament. King Agrippa got eaten while he was on stage.

Herod Agrippa sat on his throne and delivered a public address to the people. They shouted, “This is the voice of a god, not of a man.” Immediately, he was eaten by worms and died. (Acts 12:21-23)

Most people are eaten by worms after they die. You’re doing it wrong, Herod.

This wasn’t a Tremors-style giant worm, but bunches of tinier worms eating him form the inside.

Why is all this stuff even in the Bible? Do we really need to know all of that grossness?

Every scripture is inspired by God and useful for teaching, for reproof, for correction, and for training in righteousness, that the person dedicated to God may be capable and equipped for every good work. (2 Timothy 3:16,17) 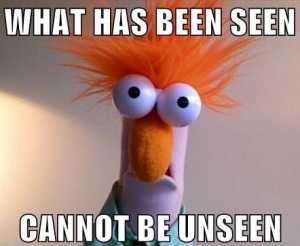 So what can we learn from these stories?

I’m sure there are other lessons. The same story can teach many lessons to many students.

But I think the bottom line is this…

God made the world; he made us; he will judge us.

God said, “Vengeance is mine; I will repay,” and again, “The Lord will judge his people.” It is a terrible thing to fall into the hands of the living God. (Hebrews 10:30,31)

Unless we turn to God and repent, a horrible fate awaits each of us.

If you’d like to further explore the intersection of the Bible and the macabre, check out the Grave Robbers Ministry.